When initially planning a solar panel installation for your house, your first thought might be: “is my roof right for solar panels?”. Like most people, you probably consider south-facing solar panels to be the best for generating energy. In fact, if you are living in the northern hemisphere (e.g. the US), you will generate the most electricity out of your solar panels when facing south because the sun is shining from the south. But, can you imagine why it might be reasonable to place your panels on a west-facing roof? Just remember one of the many factors that determine whether solar makes sense: Your peak demand time.
Not to keep you in suspense, our consideration for placing solar panels to the west is based on the assumption that the largest savings occur if you produce the most energy when you need it – and this might be in the evening, when sun shines stronger from the west! 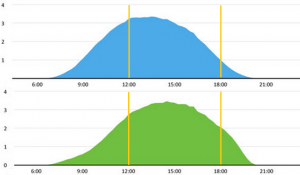 These considerations received attention over the past weeks and were also misunderstood in some cases. Surely, west-facing panels don’t produce more energy than those facing south. But, because the energy produced can’t be saved and residential panels are generally in a fixed position, west facing panels may be worth considering.
A study by Pecan Street revealed an increase using west-facing panels during peak demand hours by 49%, which resulted in a 65% peak reduction. The chart shows how energy generation varies in regard to the azimuth (or orientation of the roof) and time of the day. While south-facing panels produce less and less electricity in the evening, west-facing ones absorb more solar energy from afternoon till evening.  Some utilities will charge more for electricity during the day than during the night (also called dynamic pricing).  Pecan Streets concludes that west-facing panels might make even more sense for dynamic pricing models, making kWh-prices more expensive during peak demand hours and, hence, west-facing panels more profitable.
To answer the original question of your roof’s is applicability for solar, you must account for more than its azimuth. Your electricity needs and prices, incentives, panel and installation costs, shading, and so on must also be considered. Therefore, we at renooble take as much data into consideration as possible to create a valuable report for you. If you haven’t tried it yet, just enter your address in our search engine and see all the energy saving solutions – not only solar – we can recommend.
References:
This entry was posted in renewable-energy, solar PV, solar-PV and tagged azimuth, direction, efficiency, pecan street, study. Bookmark the permalink.